Krishnammal Jagannathan was born to a landless Dalit family in 1926. She was the fifth child of seven children and grew up in Ayankottai in Dindugul district in Tamil Nadu.

After completing primary school in the nearby village of Pattiveeranpatti, she traveled to Madurai in the year 1936 to live in a hostel to pursue secondary education. It was there, through the hostel warden that she came across the teachings of Swami Ramalinga Vallazhar, whose appeal for simple living, high thinking, the inherent-divinity of all religions and unity of all paths, and compassion for all beings in the world touched her inner-being.

Her first encounter with social injustice and poverty was by looking at her mother Nagammal who had to toil very hard even when she was in advanced stage of  pregnancy.

Her mother Nagammal was born in the lowest and most oppressed caste and gave birth to 12 children, of which only seven survived. She was widowed at the age of 32. She used to climb up the mountain range near the village early in the morning to bring grass for the cattle. Due to dire poverty, she had to do this routinely even in advanced stages of pregnancy. Once, on the way she developed labour-pains, delivered the child with the help of her companions, and trekked back home with the child and bundle of grass. Her alcoholic husband used to beat her daily. He died of cancer when krishnammal was aged 11 yrs.

Her mother Nagammal had influenced Krishnammal in developing compassion for fellow beings, particularly the down-trodden and oppressed. While hosting a meal for visiting dignitaries and honourable guests at home, she would sneak through the back-door with food to give to someone hungry and needy in the neighbourhood.

Despite her family’s poverty, she obtained university level education and was soon committed to the Gandhian Sarvodaya Movement, through which she met her husband, Sankaralingam Jagannathan.

Sankaralingam Jagannathan came from a rich family but gave up his college studies in 1930 in response to Gandhi’s call for non-cooperation and disobedience. He joined the Quit India Movement in 1942 and spent three and a half years in jail before India gained its independence in 1947. During this time he already had considerable impact as campaigner on behalf of the poor.

Sankaralingam and Krishnammal married in 1950, having decided only to marry in independent India. Her marriage to Shri.Jagannathan has been a real union. Keeping constant company to her husband, Krishnammal took part in every notable Sarvodaya Movement, including the Total Revolution initiated by Jayaprakash Narayan. She played a leading role in carving out an effective alternative to the communist technique of violent peasant struggle in terms of the Gandhian technique of Satyagraha and fast.

Sankaralingam Jagannathan and Krishnammal decided early in their life that one of the key requirements for building a Gandhian society is empowering the rural poor by redistribution of land to the landless.

From 1950 to 1952 Sankaralingam Jagannathan was with Vinoba Bhave in Northern India on his Bhoodan (land-gift) Padayatra (pilgrimage on foot), the march appealing to landlords to give one sixth of their land to the landless, while Krishnammal completed her teacher-training course in Madras.

He then returned to Tamil Nadu to start the Bhoodhan movement, and until 1968 the two worked for land redistribution through Vinoba Bhave’s Gramdan movement (Village Gift, the next phase of the land-gift movement), and through Satyagraha (non-violent resistance). For this work, Sankaralingam Jagannathan was imprisoned many times. Between 1953 and 1967, the couple played an active role in the Bhoodhan movement spearheaded by Vinoba Bhave, through which about 4 million acres of land were distributed to thousands of landless poor across several Indian states.

Jagannathan has been a life-long source of strength and inspiration to Krishnammal. She learnt ‘the art of living sans attachment’ from him. He told Krishnammal “We shall possess only mud-pots as our kitchen utensils, for it will be easier to abandon them and move from place to place in the service of the people.” He was an inspiration to forego mundane things and to live in contentment of service to others.

Krishnammal recounted one of four occasions where she stared death right in the face and did not flinch: the mob supporting some landowners surrounded her, threatening immolation with cans of gasoline. She calmly responded by requesting to sit and meditate first. Her would-be assailants jeered and continued to threaten her, but they would not harm her. Soon a crowd of villagers had gathered. Krishnammal summed up the event with one of her unforgettable quotes: “I was not afraid to die, but they were afraid to kill me.”

On December 25, 1968, a conflict broke out between landowners and tenants when the tenants asked for a hike in wages. Things spiralled out of control and very soon the entire village was caught up in the maelstrom. At night the landlords began firing, leading to a scramble by the villagers who took refuge in a nearby hut. In their anger, the landlords set fire to the hut — 44 people died a fiery death.

Krishnammal was shaken by the major inhuman act in which 44 suppressed people were burned by land owners for asking wage revision. she cried terribly and she had decided to work for the land recovery movement. “Salary rise is not the need for suppressed people instead it is own land” she understood the truth and Krishnammal’s war started at that moment.

She explained about her struggle “I was part of Vinoba Bhave’s padayatra and was walking with him pleading for land when news came on December 25, 1968, of the mass killing of 44 Harijan women and children at Kilavenmani in Thanjavur district, following a wage dispute between landlord and tiller. This horrific incident changed my life’s direction and I decided to go to Kizhavenmani and not leave till Dalits got their land.

She explained further “My husband and I began our movement by getting the temple land owned by a benami landlord distributed among the women with much struggle. About 12,000 acres of land were distributed among the Dalit women. This was my first fight against the system. I walked from village to village in the region to meet the women and slowly they became the wind under my wings. Although I was harassed, arrested and even jailed, I never lost faith. I used to gather children who worked in the fields and give them basic education”. 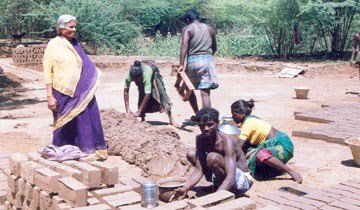 She said “I was spending days without having water and food in front of land owners in order to get the land or the distribution to working people. Initially the land owners didn’t mind me by assuming that what this lady would do. But when they understood the I wouldn’t go without getting the land, the started threatening and tried to threaten me with weapons.. Even they had tried to burn me with kerosene. I said that I will not run for my life at any situations. You do whatever you want. My stubborn nature started slowly winning”.

Some of the excessive land owners came forward to sell… I bought whole land by taking loan from “TATCO” scheme and then distributed to the respective villagers one acre per person. The villagers themselves returned the loans in instalments after every cultivation period. From that period, I am following the same method to get the land and distributing it to people” She explained.

For Sarvodaya activist Krishnammal Jagannathan land represents freedom. A lifelong Gandhian committed to the philosophy of self-reliance, Krishnammal and her husband S Jagannathan began a movement in 1968 called LAFTI-Land for the tillers’ freedom. The purpose of the organisation was to bring the landlords and landless poor to the negotiating table, obtain loans to enable the landless to buy land at reasonable price and then to help them work it cooperatively, so that the loans could be repaid.

Krishnammal first thought of the idea in 1968 when a Muslim trust in Kula Manickam village wanted to sell large tracts of land — but only to Krishnammal, not to any landlord. Since she didn’t have the money then to buy the land, Krishnammal decided it would be best to approach the matter professionally and set up an organisation to access funds.

The villagers informed Krishnammal about the availability of land, it’s location, and ownership details. Then LAFTI, along with members of the local community, negotiate with the landlord, usually demanding a rate that’s less than the market price.

Whenever she goes to any village for her movement, she stays with the poor people in their huts. “No doors, mud houses which can disappear even little rain… covered with coconut/palm leafs.. I was shattered after seeing the living standards of that people. We had planned to build houses using various government schemes and some money from LAFTI. People themselves started making bricks and we all built the houses using that bricks after burning… It was like a festival.. As a team we used to stay in a village for three months… and we make food for the total village and work hard.” she said.

LAFTI has changed the lives of 13,000 families and those who were once powerless are now in charge of guiding their future. With dignity, vision and an indefatigable spirit, Jagannathan is improving the living conditions and the future of the Dalits.

On February 12th 2013, Sankaralingam Jagannathan passed away at Ghandigram, Tamil Nadu at the age of 100. In fact, in the last few months after the death of her husband Jagannathan, Krishnammal had been bed-ridden. “I was lying down on the bed every day and I was in a state of dizziness. I felt that I would not be able to get up. But on June 1 this month I resolved not to stay in bed anymore,” she says. Ask her how she manages, and pat comes the answer, “This is how my life is. I will have my medicines and then have food from here and there,” she says.

Her mission was, and is, to liberate Dalit women and their families from their misery and their servile bondage to the landlords in the Tanjore area.

She wanted to provide a livelihood by abolishing landlessness among the poor and bringing humanity and dignity to their lives.
Even after she had crossed age eighty, her service and unbelievable activeness is really astonishing. She is working for the poor people for more than thirty five years.

To overcome the difficulties confronting a Harijan, and that too a lady, in the caste ridden society like ours and to attain a position of stature is not an easy task. But Smt. Krishnammal Jagannathan has achieved that rare feat.

Krishnammal has spent her life serving India’s poorest, providing sustainable homes and employment for the “Untouchables,” waging non-violent struggle against the devastating inequalities of the caste system.

Krishnammal Jagannathan, ushered in a silent revolution of land distribution to Dalit women in remote parts of Tamil Nadu. She is the winner of Swami Pranavananda Peace Award given by the Gandhi Peace Foundation, the Jamnalal Bajaj Award (1988), the Padma Sri (1989), the Women’s World Summit Award, Switzerland (1989), the Opus Award, The Right Livelihood Award also known as the Alternative Nobel Prize (2008) and a host of other prestigious awards.

View the following videos to know about her selfless struggle for the landless labourers.