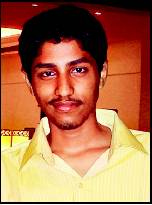 Prof Pandurangan of IIT, under whose guidance Sekar works, says, “It’s a pleasure to teach and do research with him. He has showed mastery and mathematical maturity ahead of his age.”

This entry was posted in Uncategorized and tagged Chandrasekar, engineering graduate, MTech from IIT. Bookmark the permalink.

One Response to Chandrasekar, 17, is youngest to ace MTech from IIT