If you possess the mastermind and your intellect is put to correct use, one day you can be at the top of the world. Hard to believe? Then look at the life of Bill Gates, whose consistent victory upon victory is a proof of his genius .

Born in 1955, he has become the envy of all the richest men in the world and he achieved this rare feat within the shortest possible time. Bill Gates is today the chairman and chief software architect of Microsoft Corporation, the worldwide leader in software, services and solutions and has generated revenues of US36.84 billion for the fiscal year ending June 2004. The company employs more than 55,000 people in 85 countries and regions.

Early on his life, it was apparent that Bill Gates inherited the ambition, intelligence, and competitive spirit that had helped his forefathers rise to the top in their chosen professions. In elementary school he quickly surpassed all of his peer’s abilities in nearly all subjects, especially math and science. His parents recognized is intelligence and decided to enroll him in lakeside, private school known for its intense academic environment. This decision had far reaching effects on Bill Gates life. For at Lakeside, Bill Gates was first introduced to computers.

In 1968, the Lakeside prep school decided that it should acquaint the student body with the world of computer. At this time, computers were still too large and costly for the school to purchase its own. Bill Gates, Paul Allen, and a few other Lakeside students (many of whom were the first programmers hired at Microsoft) immediately became inseparable from the computer. They would stay in the computer room all day and night, writing programs, reading computer literature and everything else they could do to learn about computing. They even skipped classes to be in the computer room, and worst of all, they had to use up all of the schools computer time in just a few weeks. They caused the system to crash several times and broke the computers security system. They even altered the files that recorded the amount of time they were using computers. 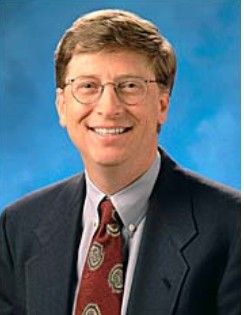 Bill Gates was determined to find a way to apply his computer skills in the real world. It was here that Bill Gates and his friend Allen really began to develop the talents that would lead to the formation of Microsoft seven years later.

In 1973, Bill Gates signed up for one of Harvard’s toughest math course. He did well but just as in high school, his heart was not at his studies. He lost himself in the world of computers once again. Bill Gates would spend many long nights in front of the computer and sleep in the class the next day.

While at Harvard, Bill Gates developed a version of the programming language called BASIC for the first microcomputer – the MITS Altair.

In December 1974, Allen was in his way to visit Bill gates when along the way he stops to browse through the current magazines. What he saw change his and Bill Gate’s lives forever. On the cover of Popular Electronics was a picture of the Altair 8080 wih the headline “World’s First Microcomputer Kit to Rival Commercial Models.” He bought the issue and rushed over to Bill Gates room. They both recognized this as their big opportunity. The two knew that the home computer market was about to explode that someone need to make software for the machines. Within a few days, Gates had called MITS (Micro Instrumentation and Telemetry System), the makers of the Altair. He told the company that he and Allen had developed a program called BASIC that could be used on the Altair.

That was a lie. They had not even written a line of code. They had neither an Altair nor the chip that ran the computer. The MITS company did not know this and was very interested in seeing their BASIC. So, Bill Gates and Allen began working feverishly on the BASIC they had promised. The code for the program was left mostly up to Bill Gates while Paul Allen began working on a way to simulate the Altair.The program worked perfectly. The MITS arranged a deal with Bill Gates and Allen to buy the rights to their BASIC. Bill Gates was convinced that the software market had been born. Within a year, Bill Gates had dropped out of Harvard and Microsoft was formed.

Shortly afterwards, he offered to buy Computer Product Company’s Q-DOS program at an exorbitant rate. The company agreed. He renamed it M-DOS and gave the operative system to IBM before the prescribed time. Bill Gates earned a lot of money without putting in much effort.

Meanwhile, Bill Gates was shrewd enough not give the full potential of the operating system to IBM. He gave only a part of the system and asks them to pay for the complete version. At last IBM was helpless and was dependent on Bill Gates and ended up paying a heavy sum for his skills. This was a first major business victory for Bill gates. Because of this agreement alone, Bill Gates made millions in royalty as all the computers use his operating system.

By this time, internet browser was becoming increasingly popular. Bill Gates’ Microsoft company was not very sure about internet browser’s future. Mark Anderson created the Netscape to browse the internet. Bill Gates invited him to become his partner but Anderson refused. Bill Gates is known for playing hardball to make life difficult for competing operating systems and applications. Putting his genius to work, he created a web browser know as Internet Explorer and distributed it free. Netscape which charged for its services faded into oblivion

Bill Gates would go to any length to maintain his exiting monopoly. But he has no qualms. He said that any operating system without a browser would go out of business. So we improved our product or else we would have gone out of business, he added. Critics say that Bill Gates’ intensely competitive approach has poisoned the collaborative hacker ethos of the early days of personal computing. His vision is such that he does not look for win-win situations with others, but on the contrary for ways to make others lose. For him, success is defined as flattening the competition, not creating excellence.

No wonder, Bill Gates shuttles between courts to fight disputes. Bill Gates has been declared by Forbes as the richest person in the word for 13 consecutive years and his net worth has reached such astounding levels, he is today worth of $56billion.

He has become one of the most important minds and personalities of our era.

In order to become successful in business, mere hard work alone is not enough. One must have the sharp acumen to steer clear of blockades along the way.