Freedom fighter Bholaram Das marked his 100th birthday this weekend by announcing that he was going back to school.

Das has enrolled in a PhD program at Guwahati University in the northeastern state of Assam – making him perhaps the oldest university student in this country of 1 billion.

“In my 100 years, I have done many things in the sphere of society, politics, governance and religion,” said Das, dressed in a suit, tie and white Gandhi cap at his birthday celebration Saturday. “I thought I must work towards a PhD that could satisfy my hunger for learning.” 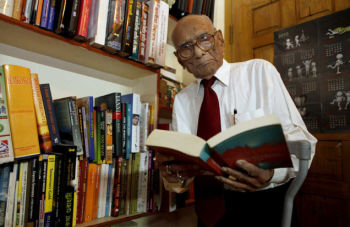 Das was 19 when he was jailed for participating in a 1930 protest against British rule. He spent two months doing hard labour and went on to study commerce and law.

In 1945, he joined the Congress Party that led India’s drive for independence, achieved in 1947.

Das worked as a teacher, a lawyer, a magistrate and a district court judge before retiring in 1971. With his wife Mandakini, he had five sons and a daughter.

For his doctorate, Das plans to study a subject close to his heart – how his native Bohori village helped in the spread of neo-Vaishnavism, a liberal and monotheistic stream of the Hindu religion credited with breaking down social divisions in Assam, one of India’s easternmost states.

The centenarian said he wanted to pursue his interest and belief in the religion’s philosophies of one God and humanism.

“It is indeed rare to find a student who is 100 year old,” said the university’s vice chancellor, O. K. Medhi.

“We are thrilled because Das can be an inspiration for the youth with his formidable spirit and dedication to public service.”

Das, who now has 10 grandchildren and a great-grandchild, is being advised in his studies by one of his granddaughters, a university professor, and other family members. His wife died in 1988.

“It amazes me that, 40 years after retiring from service, my grandfather is still mentally strong and wants to do new things,” said grandson Abhinab Das, an engineer. “This is indeed inspiring for all of us in the family.”