The inspiring rags-to-riches tale of Sarathbabu

When 27-year old Sarathbabu graduated from the Indian Institute of Management, Ahmedabad, he created quite a stir by refusing a job that offered him a huge salary. He preferred to start his own enterprise — Foodking Catering Service — in Ahmedabad.

He was inspired by his mother who once sold idlis on the pavements of Chennai, to educate him and his siblings. It was a dream come true, when Infosys [Get Quote] co-founder N R Narayana Murthy lit the traditional lamp and inaugurated Sarathbabu’s enterprise.

Sarathbabu was in Chennai, his hometown, a few days ago, to explore the possibility of starting a Foodking unit in the city and also to distribute the Ullas Trust Scholarships instituted by the IT firm Polaris [Get Quote] to 2,000 poor students in corporation schools.

In this interview with rediff.com, Sarathbabu describes his rise from a Chennai slum to his journey to the nation’s premier management institute to becoming a successful entrepreneur. This is his story, in his own words.

Childhood in a slum

I was born and brought up in a slum in Madipakkam in Chennai. I have two elder sisters and two younger brothers and my mother was the sole breadwinner of the family. It was really tough for her to bring up five kids on her meagre salary.

As she had studied till the tenth standard, she got a job under the mid-day meal scheme of the Tamil Nadu government in a school at a salary of Rs 30 a month. She made just one rupee a day for six people.

So, she sold idlis in the mornings. She would then work for the mid-day meal at the school during daytime. In the evenings, she taught at the adult education programme of the Indian government.

She, thus, did three different jobs to bring us up and educate us. Although she didn’t say explicitly that we should study well, we knew she was struggling hard to send us to school. I was determined that her hard work should not go in vain.

I was a topper throughout my school days. In the mornings, we went out to sell idlis because people in slums did not come out of their homes to buy idlis. For kids living in a slum, idlis for breakfast is something very special.

My mother was not aware of institutions like the Birla Institute of Technology and Science, Pilani, or the Indian Institutes of Technology. She only wanted to educate us so that we got a good job. I didn’t know what I wanted to do at that time because in my friend-circle, nobody talked about higher education or preparing for the IIT-JEE.

When you constantly worry about the next square meal, you do not dream of becoming a doctor or an engineer. The only thing that was on my mind was to get a good job because my mother was struggling a lot.

I did book-binding work during the summer vacation and accumulated money for my school fees. When I got plenty of work, I employed 20 other children and all of us did the work together. That was my first real job as an entrepreneur. Once I saw the opportunity, I continued with the work.

Sreeram SelvarajA classmate of mine told me about BITS, Pilani. He was confident that I would get admission, as I was the topper. He also told me that on completion (of studies at Pilani), I will definitely get a job.

When I got the admission, I had mixed feelings. On one hand I was excited that for the first time I was going out of Chennai, but there was also a sense of uncertainty.

The fees alone were around Rs 28,000, and I had to get around Rs 42,000. It was huge, huge money for us. And there was no one to help us. Just my mother and sisters. One of my sisters — they were all married by then — pawned her jewellery and that’s how I paid for the first semester.

My mother then found out about an Indian government scholarship scheme. She sent me the application forms, I applied for the scholarship, and I was successful. So, after the first semester, it was the scholarship that helped me through.

It also helped me to pay my debt (to the sister who had pawned her jewellery). I then borrowed money from my other sister and repaid her when the next scholarship came.

The scholarship, however, covered only the tuition fees. What about the hostel fees and food? Even small things like a washing soap or a toothbrush or a tube of toothpaste was a burden. So, I borrowed more at high rates of interest. The debt grew to a substantial amount by the time I reached the fourth year.

To put it mildly, I was absolutely shocked. Till then, I had moved only with students from poor families. At Pilani, all the students were from the upper class or upper middle class families. Their lifestyle was totally different from mine. The topics they discussed were alien to me. They would talk about the good times they had in school.

On the other hand, my school years were a big struggle. There was this communication problem also as I was not conversant in English then.

I just kept quiet and observed them. I concentrated only on my studies because back home so many people had sacrificed for me. And, it took a really long time — till the end of the first year — to make friends.

I became a little more confident and started opening up. I had worked really hard for the engineering exhibition during the first year. I did a lot of labour-intensive work like welding and cutting, though my subject was chemical engineering. My seniors appreciated me.

In my second year also, I worked really hard for the engineering exhibition. This time, my juniors appreciated me, and they became my close friends, so close that they would be at my beck and call.

In the third year, when there was an election for the post of the co-ordinator for the exhibition, my juniors wanted me to contest. Thanks to their efforts I was unanimously elected. That was my first experience of being in the limelight. It was also quite an experience to handle around 100 students.

Seeing my work, slowly my batch mates also came to the fold. All of them said I lead the team very well.

They also told me that I could be a good manager and asked me to do MBA. That was the first time I heard about something called MBA. I asked them about the best institution in India. They said, the Indian Institutes of Management. Then, I decided if I was going to study MBA, it should be at one of the IIMs, and nowhere else.

Inspiration to be an entrepreneur

It was while preparing for the Common Admission Test that I read in the papers that 30 per cent of India’s population does not get two meals a day. I know how it feels to be hungry. What should be done to help them, I wondered.

I also read about Infosys and Narayana Murthy, Reliance [Get Quote] and Ambani. Reliance employed 20,000-25,000 people at that time, and Infosys, around 15,000. When a single entrepreneur like Ambani employed 25,000 people, he was supporting the family, of four or five, of each employee. So he was taking care of 100,000 people indirectly. I felt I, too, should become an entrepreneur.

But, my mother was waiting for her engineer son to get a job, pay all the debts, build a pucca house and take care of her. And here I was dreaming about starting my own enterprise. I decided to go for a campus interview, and got a job with Polaris. I also sat for CAT but I failed to clear it in my first attempt.

I worked for 30 months at Polaris. By then, I could pay off all the debts but I hadn’t built a proper house for my mother. But I decided to pursue my dream. When I took CAT for the third time, I cleared it and got calls from all the six IIMs. I got admission at IIM, Ahmedabad.

My college helped me get a scholarship for the two years that I was at IIM. Unlike in BITS, I was more confident and life at IIM was fantastic. I took up a lot of responsibilities in the college. I was in the mess committee in the first year and in the second year; I was elected the mess secretary.

By the end of the second year, there were many lucrative job offers coming our way, but in my mind I was determined to start something on my own. But back home, I didn’t have a house. It was a difficult decision to say ‘no’ to offers that gave you Rs 800,000 a year. But I was clear in my mind even while I knew the hard realities back home.

Yes, my mother had been an entrepreneur, and subconsciously, she must have inspired me. My inspirations were also (Dhirubhai) Ambani and Narayana Murthy. I knew I was not aiming at something unachievable. I got the courage from them to start my own enterprise.

Nobody at my institute discouraged me. In fact, at least 30-40 students at the IIM wanted to be entrepreneurs. And we used to discuss about ideas all the time. My last option was to take up a job.

My mother is my first inspiration to start a food business. Remember I started my life selling idlis in my slum. Then of course, my experience as the mess secretary at IIM-A was the second inspiration. I must have handled at least a thousand complaints and a thousand suggestions at that time. Every time I solved a problem, they thanked me.

My friends helped me with registering the company with a capital of Rs 100,000. Because of the IIM brand and also because of the media attention, I could take a loan from the bank without any problem.

I set up an office and employed three persons. The first order was from a software company in Ahmedabad. They wanted us to supply tea, coffee and snacks. We transported the items in an auto.

In the first month of our operation, we earned around Rs 35,000. Now, the turnover is around Rs 250,000. The Chennai operations will start in another three months’ time. 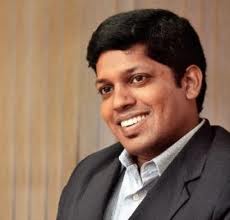 I want to employ as many people as I can, and improve their quality of life. In the first year, I want to employ around 200-500 people. In the next five years, I hope to increase it by 15,000. I am sure it is possible.

I want to cover all the major cities in India, and later, I want to go around the world too.

I have seen people from all walks of life — from the slums to the elite in the country. That is why luxuries like a car or a bungalow do not matter to me. Even money doesn’t matter to me. I feel bad if I have to have food in a five star hotel. I feel guilty.

Personally, I have no ambition but I want to give a house and a car to my mother.

I did not expect this kind of exposure by the media for my venture or appreciation from people like my director at the IIM or Narayana Murthy. I was just doing what I wanted to do. But the exposure really helped me get orders, finance, everything.

This entry was posted in Uncategorized and tagged Sarathbabu. Bookmark the permalink.