Dhoni gives the following Leadership tips for every aspiring Leader :

1. We should be a performer and we should demonstrate the same to our team. Performance is itself the most effective communication down the line.

2. Leader has to be humble in way to consider part and parcel of the team and not above the team.

3. Give genuine respect and trust to the team members.

4. Allow them to experiment and take risk.

5. In case of failure, encourage him / her to introspect and do it next time with more vigour and better planning.

6. Make every one in the team feel that , even though we are leaders, we are just one among them.

7. We should also believe in the ones who failed in the Team. At crucial times a team member who was not able to deliver might do miracles.

8. As a leader, be calm in extreme situations and lead the team from front.

9. Share the credit of success with your team members and praise them in public.

10. Above all believe in every member in the team. 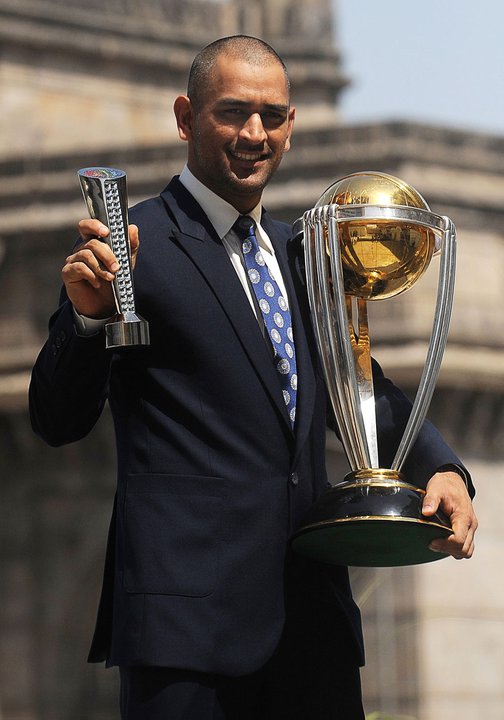 When Ganguly was playing his last match, as a gesture of respect, Dhoni asked Ganguly to take charge of the team when the ninth Aussie wicket fell. Whenever he has an opportunity, he showers his players with praises

Managing under change is a vital attribute to be learned from the leadership under Dhoni. A good leader doesn’t mind going out and exploring. Dhoni’s risk taking ability, inclusiveness and time-pressure qualities are good examples of leaders on the business side.

If you notice, instead of pressing teammates to win, Dhoni told them to just enjoy the game. Also, he has mentioned at several forums that he believes to live in the present and not worry about future or past.. Dhoni’s leadership style represents teamwork, empowerment and confidence.

Dhoni utilizes every team member at his disposal and brings out the best performance whether he is a senior or junior player. He provides opportunity for every team member to prove themselves and contribute to the best of their abilities.

Remember, he gave the last over to Joginder Sharma who doesn’t have much a track record., By putting such a person in front of a challenging task, it tells the person that the leader has confidence in his abilities and will be fired up to put in 120 per cent. This happened with Joginder Sharma in two critical matches, where he was hit all around the ground and still given the last over. He delivered on both instances!

Leaders need to be assertive yet humble and must rarely allow their personal egos to be an obstacle for the success of their organization and that’s what M.S. Dhoni showing us through his current leadership style.

Another learning from Dhoni is about, Optimal utilization of resources, which is vital for any business. Instead of giving excuses for lack of best resources, especially with the current scenario economic crisis, it is better to perform in whatever resources a leader has to his disposal

His ‘people management’ skills tell us, he is truly a great leader. When team members see their leader calm in extreme situations, they will not be rattled. It will enable them to focus on their work and do what is expected of them. Dhoni was always calm – whether the bowler started off the last over in the finals with a wide ball or the batsman played a series of dot balls in a slog over.

Mahendra Singh Dhoni is a forthright, straightforward cricketer unburdened by the baggage that generally accompanies a man onto the field, thereby restricting his outlook. At once he is intelligent and simple, aggressive and canny, tough and respectful.

When asked why he was not happy at the moment of victory at the post match conference, Dhoni replied, “I didn’t like way we played. With such a strong batting display, we should have won comfortably”. Would you ever expect the captain of a team not celebrate the moment of victory in a match that almost went down to the wire?

“I never predict what will happen in cricket. We believe in each other and we believe in the process. We will take each game in the right frame of mind,” he said

“If you have not achieved something, there’s pressure on you to achieve it. Once you have achieved it, there is pressure to sustain it. Nothing comes easy.”

“We didn’t rely on one specific individual, everybody contributed. Each and every batsman scored at some point in the series and the same applies to the bowlers also.”

In a nutshell Dhoni’s story is all about an ordinary man doing extraordinary things and a role model for every aspiring leader. Each one of us could use this model, pattern and design to create our leadership journey.

11 Responses to Lessons from Dhoni’s Leadership