The rickshawallah’s son who cracked the IAS

Tears ran down Govind Jaiswal’s face and refused to stop. Staring him in the face was the only thing he had ever wanted, and now that he had achieved it, he couldn’t even reach out for the keys on his cellphone.

He waited till the tears dried up, till the news sunk in and made that one phone call on which depended the hopes of his entire family.

Govind, 24, the son of an uneducated rickshaw vendor in Varanasi, had grown up with cruel taunts like ‘However much you study, you will still be a rickshaw puller.’ He had studied with cotton stuffed in his ears to drown the noise of printing machines and generators below his window in a poor neighbourhood where small workshops existed cheek by jowl with tiny residential quarters.

He had given Math tuitions to supplement the paltry sum his father could afford to send him each month. His ailing father had sold a small plot of land to give Govind about Rs 40,000 so that he could move to Delhi which would provide him a better place to study.

Throughout his life, he had lived with only one dream — to become an officer of the Indian Administrative Service. For him that was the only way. And when he broke the news to his family, that he was ranked 48 among 474 successful candidates in his first attempt at the exam — it was the turn of his three sisters and father to weep with unbridled joy.

“You must understand that my circumstances were such that besides the Civil Services, I had no option. I didn’t have much of a chance with lower government jobs because they are mostly fixed, neither could I start a business because I had no money. The only thing I could do was work hard at my studies.”

It was almost impossible for him to study in the one room he shared with his family. To add to his woes was the power cut that extended between 10 and 14 hours every day. The moment the lights went out, he had to shut the window to block out the deafening noise of generators in the many workshops around his home. 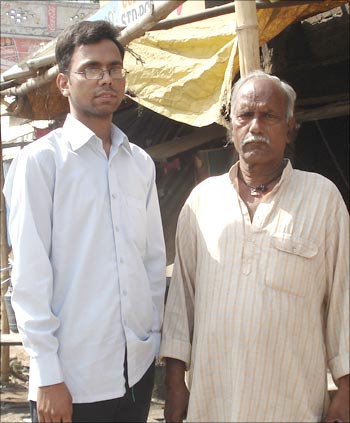 So in search for a quiet place to study, he briefly shared a friend’s room at the Banaras Hindu University. Since that did not help him much, he did what many civil services aspirants in northern India do — he moved to New Delhi

For his son to make a fresh start in a city Govind had never visited before, Narayan Jaiswal, Govind’s father, sold the only remaining plot of land he had saved after getting his three daughters married.

Working for ten years at the government ration shop, Narayan earned a living by weighing goods at the store. One day when the shop shut down, he bought one rickshaw and hired it out. He added three more and at one time was prosperous enough to own about 36 rickshaws.

That was a period of financial security and Narayan was prudent enough to buy three small plots of land. With three daughters to marry off, he knew he would need it in times to come. But bad times soon befell the family. His wife passed away when Govind was in school. For 10 years there was acute hardship. The rickshaws dwindled.

On his meager earnings, the uneducated rickshaw vendor with a hearing disability continued the education of his children. The girls were married after their graduation — Narayan sold two pieces of land for the weddings, the last plot was sold to achieve his Govinda’s dream.

Narayan gave his son Rs 40,000 to prepare for his Civil Services exam in New Delhi and pursue his childhood dream of becoming an IAS officer. For the next three years, he sent his son between Rs 2,500 and Rs 3,000 every month, sometimes foregoing the expense of treating the septic wound in his foot that continues to nag him till today.

Outside his narrow lane, opposite the Varanasi City railway station, where Narayan Jaiswal parks his rickshaws and spends most of his waking hours, he still walks barefooted with a bandage, one end hanging loose and scraping the dirty road.

“Beyond this year, my father could not have afforded to send Govind any more money. It was getting very tough for him. Govind was earning Rs 1,500 from tuitions, I don’t know what he would have done if he didn’t make it to the IAS this year. My father could not sleep for 10 days before the results came,” says Govind’s eldest sister Nirmala, whose son is almost the same age as her brother.

Now that he will earn Rs 8,000 as his starting salary during his two-year training period in Mussoorie, Govind says his first priority is getting good treatment for his father’s wound.

“I want to look after him, I don’t know if he will leave Varanasi but I will definitely move him out of this rented room that we have lived for 35 years.”

If his son’s new job dramatically changes things for the better, Narayan Jaiswal is quite unaffected by it. He is surprised by the scores of journalists and well wishers flocking to his house.

Until now, courier delivery boys found his house with great difficulty but now even the fruit cart-wallah, one-and-a-half kilometres away, will tell you where the ‘IAS’ house is.

“I like my work. I haven’t decided about the future — what could be a better place than Kashi? As long as my son looks after me, what else can one want?” he says, visibly uncomfortable with the media spotlight.

The IAS stamp has catapulted Govind to the premier league in the wedding bazaar.

There has been a flurry of wedding proposals since his selection for the IAS — around 15 till late last week, “including one from a high court judge,” says sister Mamta.

“All this will have to wait another 2-3 years, I am in no hurry,” laughs Govind.

7 Responses to The rickshawallah’s son who cracked the IAS