Striking it big against odds

Ilavazhaki’s life has all the elements of a fairytale. Growing up in a slum in Vyasarpadi, she had to work hard for things that most children take for granted. As a fish-cart puller, her father Irudhayaraj brought home earnings too meagre to feed a family of five. Ilavazhaki had often forgone her meals for the sake of her younger sisters, Ilakiya and Sevanthi. Needless to say, she considered buying school books unnecessary expenditure for her struggling family. And there was no bitterness when she had to discontinue studies after class IX. 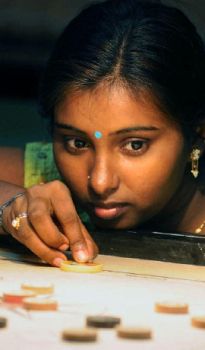 But for a square-shaped wooden board, Ilavazhaki’s life would have been totally devoid of hope. She was six when she first tried a hand at carrom. This was not surprising, because the game is an integral part of life in the slums. Often, a carrom board is the only entertainment slum-dwellers can afford. Many of India’s greatest carrom players are from the slums.

Watching his eldest daughter play, Irudhayaraj, a competitive carrom player himself, realised early that his family had an exceptionally talented child. Driven by ambition to make Ilavazhaki famous, he found the energy to train her everyday, after spending tiresome hours on the road.

His efforts were not in vain. Winning the junior nationals thrice, Ilavazhaki was well on track for the kind of glory that he wished for her. And she kept his hope alive after graduating to the women’s category, winning three golds in the Asian championship in 2005 and picking up another three in the SAARC championship, held the same year. The moment daughter and father were waiting for arrived in 2006. After striking it rich again in the SAARC championship, she won the World Championship in New Delhi.

Until this victory, Ilavazhaki was in the shade. Winning the world championship made her known beyond the small circle of players and followers, which is the world of carrom. Recognition of her talent did little to change the condition she and her family lived in. Her family still struggled due to the lack of any substantial income. Ilavazhaki has a form of hyperhidrosis (excessive sweating), induced by her anxieties about her family. To her credit, she crafted some of her brilliant victories despite being handicapped by sweaty palms.

The tide turned in the early part of this year. Days before she left for Cannes to compete in the Fifth World Carrom Championship, she was offered a job as sports secretary by the Sri Ramanujar Engineering College (Vandalur), known for its interest in improving the lot of brilliant sport persons battling difficult financial situations.

After Cannes, which saw her crowned world champion for the second time, life has not been the same. Her position as sports secretary in the college meant she could be a student again. To help her make up for the lost years, she is being trained how to use a computer and speak English. She has also joined a meditation programme to help her deal with the psychological problem that makes her palms sweat. The college management is willing to give her father a job as a driver, provided he gets a licence. Having enrolled for driving lessons, the fish-cart puller is working towards it. A seat, in a polytechnic or an engineering course, is reserved for one of her sisters, Sevanthi, who is in class X.

Suddenly, everything seems to be falling in Ilavazhaki’s lap. Following her Cannes victory, the Tamil Nadu Government gave her a cash prize of Rs. 10 lakh. A few companies are keen to have her as their brand ambassador. The All India Carrom Federation is campaigning for an Arjuna Award for Ilavazhaki. If she gets it, she will become the first woman carrom player to be thus honoured. And, what’s more, it will be the perfect culmination for a fairytale.