Wilbur Wright, the eldest of the ‘Wright Brothers’ was born on April 6, 1867 on a small farm near Millville, Indiana. In 1871, four years later, Orville was born in Dayton, Ohio. His father’s name was Bishop Milton Wright. He was a minister and later became a bishop of the Church, in United Brethren. He was a distinguished bishop. Bishop Milton and his wife Susan Catherine had four sons – Reuchlin, Lorin, Wilbur and Orville, and one daughter Katherine.

The Wright household was a stimulating place for the children. They grew up in an environment where there was always much encouragement to children to pursue intellectual interests, to investigate whatever aroused curiosity. The house of Wright family had two libraries. One was Bishop’s study library, where books on theology were kept, and the downstairs library had a large and diverse collection. Wilbur and Orville’s father was a firm disciplinarian. Both the parents were loving-natured and the family was a close one.

Wilbur was the third son of the Wright family and Orville was the fourth one. When the boys were 11 and seven, their father brought a toy ‘Helicopter’ for them, which sparked their interest in flying. Though their ‘helicopter’ was fragile and did not survive due to their rough play, it ignited an interest in them for the hidden world of aviation, and ultimately put the man flying in the sky. 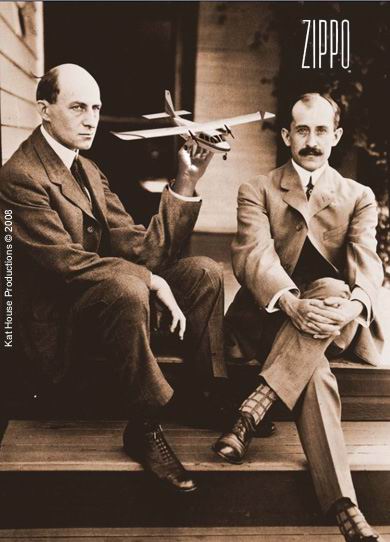 Over the next several years, the boys tried to build these themselves. They called them “bats”. But the larger they got, the lesser they could fly. The innocent boys didn’t know that a machine with only twice the linear dimensions required eight times as much power. Both brothers were discouraged for the time being and diverted their attention to kite-flying.

The Wright family moved from Richmond, Indiana back to Dayton in June 1884. Wilbur was to have graduated from high school. But he left Richmond without receiving his diploma. He was an excellent student. After returning to Dayton, he rejoined Central High School the next year for further studies in Greek and trigonometry.

At the age of 19, Wilbur Wright was hit in the face with a bat while playing an ice-skating game. The injury at first didn’t seem serious. A few weeks later, he began to be affected with nervous palpitations of the heart, which precluded the realization of the former idea of his parents of giving him a course in Yale College. For the next four years, Wilbur remained homebound. He suffered as much from depression as from his vaguely-defined heart disorder. He spent those years at home, caring for his mother suffering from tuberculosis.

The First Step in the Career

Wilbur and Orville’s mother Susan died. At that time they were just 22 and 18 respectively. Shocked by this event, Orville decided to quit school. He was an average student. He started a printing business with his elder brother. They published a four page weekly: ‘West Side News’. It was for the first time they introduced themselves as ‘The Wright Brothers’.

The business did not do well, so they diverted to retailing, repairing and manufacturing bike for next four years.

Later on, the brothers went deep into the business of bicycles. And so Orville invented a self-oiling wheel hub.

In 1896, Orville suffered from typhoid. While taking care of him, Wilbur read about the death of Otto Lilienthal, a famous German glider pilot. He had made over 2,000 sustained and replicable glides. That was a turning point for the brothers, who got seriously interested in flight again. They read all the articles on aeronautics that they could get.

To get more details, Wilbur wrote to Smithsonian Institution, requesting to provide them published papers on flight. In the letter, he wrote: “My observations… have only convinced me more firmly that human flight is possible and practicable. It is only a question of knowledge and skill, just as in all aerobatic feats.

He requested for papers, saying that he was about to begin a systematic study of the subject in preparation for practical work.

Wilbur asked Octave Chanute, a civil engineer, who wrote about early aviation experiments, for his help in gathering still more information. At that time he had been afflicted with the belief that flight was impossible to man. He wrote: “My disease has increased in severity and I feel it will soon cost me an increased amount of money, if not my life.” In the letter Wilbur outlined his solution for the need to control a flying machine. He described a technique called ‘wing warping’ – which required twisting the surface of each wing to change its position in relation to the oncoming wind.

Chanute and Wrights kept up a regular correspondence during the brothers’ process of building a manned flying machine. Together with his brother Orville, a mechanical wizard, they became self-taught engineers.

In the year 1900, the Wright Brothers began their first field experiment. They designed the glider to be flown as a kite with a man on board. But it did not have enough lift. So, they flew it as an unmanned kite operating the levers through cords from the ground. In the summer 1901, the Wright Brothers built a bigger version of their previous glider. But again its lift fell short of calculations. They built a wind tunnel to measure the lift data themselves. They built it in the winter of 1901. In the process, they discovered that the commonly accepted coefficient of lift was too high. They also identified a longer and narrower wing shape, that was for more efficient for flight.

The year 1902 was the golden year for the Wrights. In the fall, they successfully tested a new glider based on their own measurements. They made almost 1,000 gliding flights – some covering distances even more than 600 feet. In the next year, Wright Brothers made another breakthrough. Ship-building literature did not prove enough to provide the theory of propulsion for the propeller, which they needed on their aeroplane. They built the first efficient air propellers. They also built a four-cylinder engine that got the best power-to-weight ratio than anything around.

The Wrights had not even flown the Flyer yet, but they applied for a patent of their work. On December 17, 1903, at 10:35 a.m., the Wright Brothers made an aviation history. With a few jerky up-and-down movements, Orville flew the Flyer for 12 seconds. He covered just 120 feet. They made a total of four flights that day before a gust of wind damaged the Flyer. In 1905, the Wrights made the world’s first ‘practical’ aeroplane. It could stay airborne for more than half an hour. The next year, on May 22, they succeed in receiving their patent for the ‘Wright flying Machine’. Wilbur made record-breaking flights with their new improved machines near Le Mans, France. In five months of flight demonstrations, he made over 100 flights, that was airborne for total 25 hours. He ended with a record flight of 2 hours and 20 minutes at a stretch.

After winning a contract to produce Wright aeroplanes in Europe, Orville got the chance to shine in Fort Myer, Virginia, demonstrating the worthiness of the Wright Flying Machines for the U.S. Army. The Wright Brothers astonished the world with their exhibition flights in France, Italy, Germany and the United States. Wright Brother’s planes became the world’s first military aeroplanes to be used by U.S. army.