Inspiring story of India’s Only News paper for AIDS

Maragatham, 35, is a daily passenger on the train to Chennai, which stops at Karur, a textile town, 430 kilometres south of the metropolis. She trades in readymade garments. Every 15 days, she waits eagerly for a newspaper distributed free on the trains she boards to get to Karur.

For Maragatham, the eight-page colour newspaper, Positive +, is interesting because for the first time she is able to read openly about HIV/AIDS in her own language. “I learn new things about this dreaded disease with every issue,” she says. After Maragatham has read the paper, she makes sure that she hands it over to someone else, even students of a college in Erode, who commute regularly on this train.

But, why would anyone want to start a newspaper in a country that has almost 62,500 registered newspapers, of which about 2,130 are dailies? Furthermore, a newspaper in the age of Internet newspapers and recession, that deals with just one subject and which is distributed free of charge seems a losing proposition. 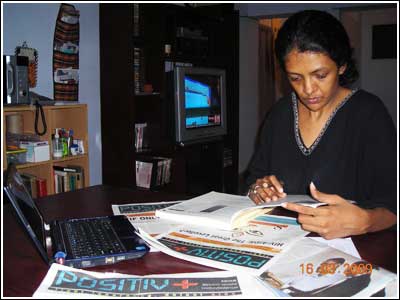 So what made Asma Naseer, the person behind the great idea, take the plunge? “Well,” she says, “we had been thinking about doing it for several years, but never really put our minds to it. Now it has at last happened.”

Four months into operations – the first edition was out on December 1, 2008 – it takes about Rs 50,000  to print and distribute each edition of Positive +, as the advertisements are few. But money has been trickling in. The Tamil Nadu Aids Control Society has taken advertisement space for six months, which is worth about Rs 12,000 per edition, while some shopkeepers and well-wishers are now coming forward with small advertisements.Several generous friends have also contributed, which includes an initial private gift of $1000 that enabled the project to take off.

“The very fact that four months into the experiment, we are facing demands of up to 50,000 copies, which we are unable to print at the moment, shows that people find the paper useful,” says Asma, who is in her thirties. It will need at least Rs 400,000 every month to print and distribute 50,000 copies door-to-door even in the small area it now covers. That is Asma’s dream.

Currently, 5,000 copies of the publication roll out of a small press to be distributed free in areas like Adayar, Besant Nagar and Thiruvanmiyur in Chennai by volunteers or newspaper boys for a token sum. Three hundred more copies are given out on trains in the Karur-Trichy section, mostly among vendors and daily wage earners.

There is also a free online version at http://positivecommunications.org/

But what’s so special about this newspaper, one might ask. Well, besides the kudos due to a single woman’s effort, it is the manner in which HIV/AIDS is treated that is striking. What immediately impresses people as they turn the pages is the commitment it displays to building up a friendship with the reader. And it is bilingual. In fact, the newspaper design is quite innovative. Both Tamil as well as English material appear on the same broadsheet, which is then folded into tabloid size, with every reader getting access to both languages in a single copy.

The newsprint is grainy – it is composed and designed on a tiny laptop on a dinner table. But one cannot miss the bonhomie it exudes, issue after issue. And yes, with Tamil Nadu considered an HIV/AIDS hotspot, it is only appropriate that Chennai should be home to India’s first newspaper on HIV/AIDS.

However, Positive + is not a scaremonger, for it does not churn out dull statistics on HIV/AIDS, nor does it wave the red flag of fear. The reassuring phrase is: “It is not our concern how someone contracted HIV. We are only interested in seeing that the infected person has a life of dignity. And, in preventing fresh infection.”

In the very first issue, filmmaker and activist Ajit Hari, the managing editor of Positive +, put it this way: “Everyone – simply everyone – who is infected has just one refrain, ‘If only I knew’.”

With concerted nation-wide awareness campaigns, most people have heard of HIV/AIDS. But knowing about AIDS, coping with HIV, dealing with the associated trauma – that is an entirely different ball game, Asma points out.

“Even I, who thought of myself as a fairly intelligent, educated, well read and aware person, was surprised by how little I actually knew about HIV/AIDS and how it actually affects lives,” explains Ajit.

Yes, the alerts are all there in the paper. Little boxes containing the India and state figures of the affected; the long AIDS guide column; the hotlines to help; and the addresses of hospitals, blood banks, counselling centres, testing centres, ART centres and positive networks. It contains information about community care centres and outreach programmes, as well.

From publisher-editor Asma’s desk comes a little note. In a recent issue, it was titled boldly, ‘My AIDS Story’. In a chatty style, it took the reader through a journalist’s first encounter with HIV/AIDS and the typical warnings from friends and family, “Oh! You were covering an AIDS assignment…wash your hands, change your clothes…”

Week after week, the pages narrate the tales – of HIV-positive Padmavathy, who is president of Tamil Nadu Network of Positive People; of Anandy’s bold initiative (she sought an HIV test before an arranged marriage), making the reader believe there is hope and that it is always better to be safe than sorry.

The paper captures the story of India’s tryst with AIDS and wise words from respected community leaders. An early edition carried Mother Teresa’s thoughts on AIDS. On one cover there was a message from the Archbishop of Madras, Rev A M Chinnappa, on the occasion of Christmas, and from Sadguru Jaggi Vasudev on Pongal. There is sometimes anecdotal caution against stigma – a little story about Mary of Magdalene, with Jesus telling people, “Let one without sin cast the first stone”. One recent edition had the picture of the most powerful man in the US, President Barack Obama and the First Lady, taking the HIV test.

“There are 2.44 million HIV stories from India to write about,” Ajit says. “Each story is a lesson in what not to do, how not to let it happen to you.”

Inspiration needed, anyone? Take it from Asma, Ajit and their Positive + attitude.

This entry was posted in Uncategorized and tagged AIDS, Asma Naseer + AIDS, HIV/AIDS, India's only news paper for AIDS. Bookmark the permalink.