A hero who goes unnoticed 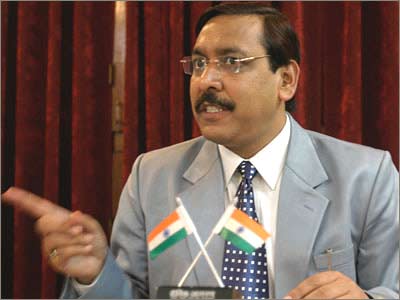 Why do we look for heroes in all the wrong places? We’re stuck in our movie seats and in our history books, while today’s heroes go unnoticed. I pondered this question and its implications while sitting inside a Toyota Qualis in Ghaziabad, Uttar Pradesh. On the drive out of the city, back to Delhi, I noticed that the wide road was spotlessly clean and perfectly paved. No cavernous potholes, no rubbish clogging the drainage system, no plastic wrappers blowing by like tumbleweeds.

“We’ve collected one crore rupees (Rs 10 million) of ‘lost’ money since July. All of it has been invested back into the city’s infrastructure and sanitation,” Ajai Shankar Pandey had told me.

Pandey, the Municipal Commissioner of Ghaziabad, is one of those heroes who go unnoticed. But he prefers it that way, and insists on not being videotaped or recorded.

“I don’t want the media to focus on me,” he says. “I want them to write about the message. That’s the power of the media, the ability to communicate ideas on a mass scale.”

Every morning, Pandey arrives to office ten minutes early and brooms the floor, dusts the furniture and takes out the garbage. He asks each of Ghaziabad’s citizens to make a similar effort.

“When I arrived, I told the people of Ghaziabad, ‘There are sixty lakhs (6 million) of us. Imagine how much we could accomplish if we each did just ten minutes of work a day!’”Pandey sits at his desk surrounded by mountains of paperwork. His rich baritone voice, echoing around the sparsely furnished room, is full of earnestness and energy. Throughout the interview, Pandey simultaneously handles phone calls and signs documents.

Pandey drew from Gandhian ideals when creating this initiative. The larger than life painting of Mahatma Gandhi in his office speaks of this devotion.

“We must be like the Mahatma in action. He not only cleaned his own house and spun his own clothes, he also went to the slum areas and did sanitation work… People say that Gandhi is a great man, but then they act in a completely different manner. I don’t want to change the institutions of this country; I want to change people’s hearts.”

While waiting for one of these phone calls to end, a wall-mounted board grabs my attention. It is covered with an array of letters from the citizens of Ghaziabad, all attributing Pandey with the monumental improvement their city has seen.

What strikes me is their diversity: A small thank-you from a boy at the local middle school, a thick, glossy letter featuring an impressive letterhead and fancy signature from a local industrialist, a four-page, hand-written note in Hindi from a 65-year-old woman.

When Pandey puts down the phone, I comment on the amazing outpouring of support he has received in just six months in office.

“That’s not even one percent of the letters!” he laughs, pointing at the board. “We hardly have place to store them any more.”

Pandey begins the interview by recounting an incident that occurred in 1994, while he served as subdivisional magistrate in the Mathura district of the Agra division.

“I’ve always had an interest in urbanity, so my whole life I’ve worked to understand it. I believe that man learns from experience, and one experience from my time in Mathura will always stay with me,” he says.

One day, the sweepers suddenly went on strike and made impossible demands. Within a week, heaps of garbage lined the roads. All around the district, things became quite unsanitary and disgusting. I asked the citizens to help me dispose of the waste; they refused. I told them it was in their own best interest, but no one listened. Then, I asked the sweepers to call off the strike, and they refused. Now I have a real problem, what am I to do?” he asked.

“I again thought of Gandhi, and decided to follow his teachings. Every day, I went out into the middle of town, carrying my broom, and I would proceed to sweep the streets and gutters. It was only me at first, so my effort didn’t make too much of a difference. People pointed and laughed at me. But after a few days, my colleagues began to help.

“Three then five and finally ten joined me in the street. After five days, the citizens saw our sincerity, and began to help themselves. Soon, we had 1,000 people working for four to five hours each day. Seven days we did this. Finally, the sanitation workers came and begged us to stop. They wanted their jobs back, and agreed to stop the strike,” he remembers.

“Firstly, the elite class of society, who usually behave as if they are above this work, are capable of picking up the broom. And secondly, the sanitation workers will work harder if they know they are respected and appreciated for the difficult work they do. When society is in harmony, it’s a reciprocal process that works for everyone’s benefit.”

After his experiences in Mathura and with his devotion to Gandhian ideals, Pandey felt compelled to make a difference, though he was unsure how to do it.

It was another incident, in 2000, which finally propelled Pandey to formulate his plan.

I was on a trip to Germany, and while in Frankfurt, I had what some might call an epiphany.

“While strolling through a spectacularly clean park, I thought to myself, ‘If only India could take care of its public spaces like they do in Germany.’”

“As I thought this, I noticed a young woman, who was dressed in expensive clothes, and was walking her dog. Suddenly, the dog stopped, and did his business. This woman immediately withdrew a plastic bag from her purse, collected the waste and deposited it in a nearby dustbin. That’s when it hit me: just ten minutes a day,” he says.

“All cultures have their respective good aspects and bad aspects. I believe we should synthesise the good aspects and filter out the bad ones. India may have a lot to teach Western cultures, but we have plenty to learn from them as well. We should exchange our best values.”

When Pandey took office on June 18, he found that Ghaziabad suffered from chronic corruption. It was so bad that city officials and hand-picked contractors had established an in-built 15 per cent hidden payment for each new project. In response, the populace became apathetic and the few honest contractors in town packed their bags and left. Civic sense had disappeared altogether. Pandey had found the right place to implement his plan.

“There were a lot of problems and much work to be done. But, more or less, these same issues occur everywhere. Wherever there is construction occurring, whenever these contracts are signed, there are caucuses of people making money that they didn’t earn. I’d seen it and dealt with it before.”

Pandey points out that there were two radically different approaches available to him:

“I could use the whip to threaten, scare and bully the contractors and officials into acting straight. Or, I could use the Gandhian approach, and appeal directly to their souls. Which one of the two do you think works best?” He asks rhetorically, before continuing, “My experiences in the police force have taught me that using the whip does not work in the long run, only the short run. But when you appeal to someone’s soul, though it may not work in the short run, it will almost always work in the long run.”

Pandey met each of the involved parties one-on-one and asked them a few uncomfortable questions. “I told them: ‘Brother, this money you are making will raise your children, pay for their food and fund their education. Don’t you want it to be earned honestly?’”

After sufficiently shaming them, he proposed a three-pronged plan meant to benefit both contractors and municipality alike.

“Number one, they had to agree to complete what they had already been paid for. Many projects were lingering unfinished, but contractors had already received the full sum from the government. Number two, any inferior work — and there was a lot of it — was to be redone in a proper manner. Finally, I told them that the 15 per cent in-built hidden payment will not be pocketed by any member of my staff ever again. Now, that 15 per cent is invested directly back into the city’s funds.”

Many contractors didn’t believe him or were unwilling to accept his offer. “A lot of them did not trust me at first; they thought I had a hidden agenda. Or they laughed at me and said I was crazy,” he admits, before continuing, “People said, ‘It is not your job to do this. You just like all the media attention. This is all a big drama you are making, with the jhadu (broom) and the hidden payments.’

During those dark times, while others tried to humiliate him and sabotage his efforts, Pandey held onto lessons taught to him by his father.

“I’ve always tried to emulate my father and his values. When I was younger, he told me that perseverance always prevails. He said, ‘Whenever you try to do something great, they’ll make a joke of you. But if you can withstand their taunts and stand strong, you have made it past the first stage. Then, in the second stage, they oppose you. They may even try to do you harm. But if you can pass that stage — it’s a very difficult thing to do — then you will succeed.

So Pandey blocked out the negativity, and worked to bring a positive outlook to his office based his approach on three tenets: Honesty, transparency and teamwork. He expects each city official to embrace these values with the same passion he does.

“He’s the best employer I’ve ever had. It is a dream to work for him. At the core, he operates in a very simple way. He’s completely honest; he never says one thing in a meeting only to tell me something different behind closed doors. It’s a refreshing experience,” says Arun Kumar Mishra, an accountant working for the municipal corporation.

Pandey had planted the seeds of change, and slowly, they took root and blossomed.

“Recently, in the last few months, the people have truly embraced my idea. Construction is completed in a satisfactory, timely manner. Companies which had once denounced Ghaziabad altogether for its corruption have moved back and started operating again. Citizens are sacrificing ten minutes each day. And Ghaziabad has never looked better.”

When asked to project his programme from a macro, country-wide perspective, Pandey hesitates. “I can’t assure you it will make it all the way to the top. But it’s a self-motivating philosophy, and if enough people take it up in earnest, the potential impact is immeasurable.”

After the interview, Pandey hands me a ceremonial gift, the same he gives to each visitor to his office: A brand-new jhadu.

“It’s a physical manifestation of the philosophy,” he says. “We should always envision a brighter future. Right now, India stands at a crossroads. My goal is to give her a push down the Gandhian path