NR Narayana Murthy, who steps down as Infosys chairman on August 20, is a role model for not just what he achieved but also how he did it. Here are 30 lessons from Murthy, one for each year he spent at company.

Murthy, a self proclaimed socialist in the mid ’70s was jailed for 72 hours in Bulgaria. The experience taught him that entrepreneurship and job creation is the way to alleviate poverty.

2-You might fail, but get started. Learn from mistakes and move on.

In 1976, Murthy founded Softronics, a company that lasted a year and a half. When he realised that his first venture wasn’t taking off, he moved on.

In 1981, a determined Murthy started Infosys with Rs 10,000 he borrowed from his wife. In few years, Infosys went on to become one of the largest wealth creators in the country.

4-Cut Yourself a Slice, Not a Large One Always

When Infosys was set up, Murthy took a pay cut while salaries of other co-founder’s were increased by 10 percent. According to Murthy, a leader needs to show his or her sacrifice and commitment

After Murthy convinced seven of his colleagues, there was a problem. Nandan’s future inlaws were not sure about him. Murthy met Nandan’s uncle and convinced him.

6-Own Up, and Then Clean Up

In the ’80s Infosys developed an application for a German client. Murthy noticed a single character error and informed the client immediately.

7-Trust in God, But Verify with Data

In God we trust, the rest must come with data, is perhaps Murthy’s favourite statement. When confronted with difficult decisions, he tends to rely on data.

Infosys almost wound up in 1990. Murthy did not want to sell the company. He asked co-founders if they wanted out and offered to buy their shares. All of them stuck together.

Infosys won a contract from Reebok in the early ’90s. Seeing the founders involvement, the software, was nick named ‘Dinesh, Murthy and Prahlad.’ Infy veterans still recall those days.

After the IPO, Infosys decided to share a portion of its equity with employees. This helped them retain talent and gave employees a sense of ownership. Murthy is proud of having given away stocks worth over Rs 50,000 crore to employees.

11-Treat your People Good, but Your Best Better

Murthy always had a thing for good performers. And he rewarded them well. When Infosys decided to give its employees stock options, Murthy insisted that some shares be given to good performers through the ‘Chairman’s quota.’

12-Hire a Good Accountant, Even if he is Argumentative

A young, argumentative Indian, was asking too many questions at an annual general body meeting of Infosys. More impressed than irritated, he hired Mohandas Pai, who went on to help Infosys list on Nasdaq.

13-When in Doubt, Disclose

Keep your books clean and leave the cooking to the chef. Murthy’s philosophy about being open and transparent has given the company a lot of credibility. He often says, “When in doubt, please disclose.”

14-Leave the Family Out

Murthy told his wife that only one of them could be with the company. Murthy, along with other founders, said that none of their children would work for Infosys. This left no room for nepotism at Infosys. 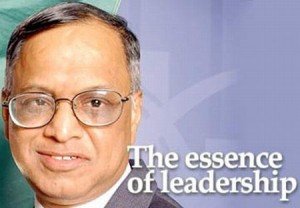 In 1994, when General Electric wanted to re-negotiate rates, Murthy said no to selling services any cheaper. This helped Infosys not to be overly dependent on any one client.

16-Make hay While the Sun Shines

In late 90′s, India’s tech companies made use of the Y2K opportunity to make themselves known in the global market. For Infosys, it was a great opportunity to enter into long-term relationships with their customers.

When the sexual harassment case against Infosys’ top sales guy Phaneesh Murthy threatened to tarnish the company’s brand, Murthy decided to quickly react. He let go of Phaneesh, and settled the case out of court despite Phaneesh wanting to fight it out.

Murthy carries and updates a mental model of Infosys’ business all the time. According to him, every leader must have a model, consisting of six to seven parameters that might affect business.

19-Keep it Simple, Not Silly

Keep your life simple and straight. That way, you get to work more and worry less. Murthy is known to be frugal with money. Despite being one of the richest Indians, he leads a simple life. However, he does not cut corners on buying books or brushing up on literature.

20-Founders Keepers, but Not Forever

Murthy’s decision to not allow founders to continue with the company after the age of 65 set another standard for the company. This way, younger leaders at Infosys had a greater chance at the top positions.

21-Talent Spotting and Division of Labour

Murthy is known to have an eye for talent and a talent for dividing labour. Nandan was given sales responsibilities while Kris and Shibu did the tech stuff. N S Raghavan was asked to handle people and Dinesh was assigned quality.

22-Hold on to Your People but don’t Cling

Letting go is never easy but its not good to cling on to your colleagues either. Amongst the founders, Ashok Arora, Nandan Nilekani and K Dinesh have quit Infosys. Infy veteran Mohandas Pai has also left Infosys.

23-Give, it only gets you more

In 2010, the Murthy’s donated $ 5.2 million USD to Harvard University Press for a project that aims to make India’s classical heritage available for generations to come. He is also supporter of the Akshaya Patra Foundation.

24-Do it First and Do it Right

25-Perils of Being a Poster Child

Being the poster child of Indian IT industry, Infosys and Murthy have been at the receiving end of many criticisms. The company has been accused of taking away American jobs and been called a “chop shop.”

Rich businesses were considered to be dirty in the days when the country had a socialist bent. Infy was a company which got rid of this sentiment. Murthy, with his ‘no compromise’ policy on greasing palms and doing ethical business, set the standards.

27-Do Not be Afraid to Court Controversy

Ever since Infosys became a success, Murthy was under constant public glare. This did not deter the straight talking Murthy from courting controversy or voicing his opinions openly.

With big investments in training, development and building facilities, India’s IT bell-weather has always been keen on grooming the younger generation. Murthy drove the culture of learning in the company in its early days.

The big man of Indian IT kept his personal life simple. He lives in a simple, middle class house and flies economy till date. Murthy has always been accessible to people around him.

Murthy knew the importance of creating an image for Infosys. He invested in creating a sprawling, world class campuses early on, bigger than any other company’s headquarters in the country, that would make his global customers feel like they were in a global office.