How many people in Delhi know a man called E. Sreedharan? He is 70. Should have retired a long time ago with enough achievements to boast about to his grandchildren. Most of his working life he was yet another unknown engineer with the railways, until he took up the challenge of building the Konkan Railway that reduced the Mumbai-Kochi distance by one-third. Everybody said it wasn’t possible. Also, that it would cost too much money, will be a white elephant, will be technologically impossible, will ravage the environment. The usual reasons why no new infrastructure can be built in India. There were PILs filed, processions taken out. He defied them all and built India’s first, genuine railway project of any notable size after the British.

When the government was short of money, he raised public bonds and that was a decade ago when such things were unprecedented. The Konkan Railway is to Indian infrastructure what the Mohali stadium is to Indian cricket.

Sreedharan did not stop there. Everybody laughed when plans to build a metro rail in Delhi were announced. All of us knew the chaos even a small, one-line metro in Kolkata had caused for a decade and a half. But Sreedharan took up the project. It is now being built, ahead of schedule, in spite of the setback of the Japanese sanctions after Pokharan and without making a tenth of the mess the construction of an ordinary flyover creates in Delhi. Yet, how much credit has Sreedharan got? How often do you see him on television, on the front pages of our newspapers? Or maybe you will, when someone envious of what he has achieved, and the fact that he will leave behind a monument to his own achievement this city should be proud of, files a complaint with the CBI, CVC, a PIL, and so on.

He is a modest man. It is not the self-effacing version of modesty which politicians wear, but the genuine kind. E. Sreedharan, architect of the Konkan Railway and the Delhi Metro Rail, believes that all his achievements were the result of team efforts

.The 71-year-old civil engineer (“still looking forward to retirement”) has been selected as one of the most outstanding Asians by Time magazine. But he takes it in his stride. “Why do you want to write about me?” he asks this correspondent. “Write about the project.” The project is mapping Delhi with a world class metro rail network. That is his focus and passion now.

Focus and passion. Probably these are the keywords. But when he is asked about the mantra of success, Sreedharan again downplays his role. “I have been lucky enough to pick up the right people for the right job,” he says.

So why should one write about Sreedharan? Because he is an extraordinary man, an extraordinary bureaucrat, who believes in certain values and has sustained them throughout his life against umpteen odds. 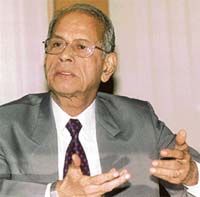 This was the case from the start. In 1963, disaster struck the Rameshwaram island when tidal waves washed away the Pamban bridge connecting it with mainland Tamil Nadu. A passenger train was swept away, killing hundreds of persons.

The Southern Railway decided to restore the bridge and set a target of six months. General Manager B.C. Ganguly advanced the deadline by three months and the Railway Board assigned the task to a 31-year-old executive engineer, Sreedharan. It was a tough task as it was an old bridge, built by the British in late-nineteenth century, with 146 spans and a scherzer-a steel girder which opens up for large vessels to pass under the bridge.

Sreedharan took up the challenge and advanced the deadline by a month, making the task tougher. He made the bridge functional in 46 days. He achieved this by the application of some ‘commonplace values’-discipline, punctuality and honesty-and the introduction of a new work culture. These traits continue. After the Delhi Metro Rail Corporation (DMRC) was set up, one of the first things Sreedharan did as managing director was to instil a “sense of corporate culture”.

“In private organisations run by the Tatas, Birlas and Ambanis, it is not difficult to stick to deadlines,” says Sreedharan. “The word of the boss is final.” In a government set-up, where there are too many bosses and too few juniors, it is next to impossible. But not totally impossible, as Sreedharan has proved. He believes in working with slim organisations. (He also believes in being slim.) While it took more than two decades to build the Kolkata metro (“The result of bad planning,” says Sreedharan), Delhi stuck to its deadline of December 2002.

In Delhi, he did not have to face many hurdles. There were no stay orders, no dharnas. People in the Old Delhi area (Chandni Chowk) did object to their houses being demolished . But the DMRC used the tunnel boring machine technology to solve this problem. It has ensured that there were no major traffic bottlenecks, no demolition.

He is focused and passionate about his work. His insistence on deadlines had earned him 20 transfers in the early years of his career.

Sreedharan, who has been in the Indian Railways for 50 years, had successfully completed one mega-project earlier-the Konkan railway between Maharashtra and Mangalore. The rail-line was mooted in 1990 by then railway minister George Fernandes, while talking to Railway Board members. After stating it, Fernandes himself dismissed it as impossible.

A month later, Sreedharan went to Fernandes with a well-charted out plan. “I told him that we will have to work in a different fashion,” he recalls. Probably his enthusiasm infected Fernandes, who got cabinet approval for the project within three days. Maharashtra and Kerala immediately agreed to the project, but Karnataka chief minister Virendra Patil objected.

Sreedharan, then a member of the Railway Board, went to Maharashtra, Karnataka, Goa and Kerala and got all the necessary approvals before his ‘retirement’. But retirement was not to be as Fernandes wanted him to head the West Coast Railway. Thus the Konkan Rail Corporation was born. It created an engineering marvel by laying a rail network across the mountainous Western Ghats.

Sreedharan insists he does not have any special skills to get the best out of people. “I always found that people cooperate if you work for a good cause,” he says.

Is he a workaholic? “No,” says he. “I am committed to my work but not a workaholic.” His colleagues agree that he does not believe in making people stay on in the office if they have finished their given task. “He even takes a nap in the afternoons,” says a colleague.

Sreedharan, who was born in Chattanur, a small village near Palakkad in Kerala, does not have much of a social life. “Once in a while I go to classical music concerts,” he says. He also makes it a point to visit Kerala at regular intervals to meet relatives. “Very often, he travels by lower class,” says a colleague. A favourite journey is, of course, through the Konkan rail stretch, which he can watch with proprietary pride.

” I have four children,” says he. “We were not really well-off. But my wife, Radha, took care of all those problems.” One son is an engineer but he did not join the Railways despite his father encouraging him.

“I believe that when an officer is given a particular task, he should be made responsible to finish it,” says Sreedharan. He almost has an obsession with deadlines. (In the early years of his career, it earned him 20 transfers.) Every officer in DMRC keeps a digital board which shows the number of days left for the completion of the next target. On April 23, it was 160 days left for the Tis Hazari-Tri Nagar section of the Delhi Metro to be complete.

So, where he does go from there? “Retirement,” he says with a twinkle in the eyes. He thanks God for giving him success. “I am a religious person but religion does not mean going to temples. To me it means leading a virtuous life,” he says.

Success and virtue. A rare combination in today’s world. But they run side by side in Sreedharan’s life. Like rail tracks.