It is the kind of stuff fairy tales are made of. From being raised by a single mother who was a government teacher, studying in a government school in the suburbs of Chennai and graduating from a college in rural Tamil Nadu to winning the most prestigious Breuer award for research in Alzheimer’s disease at the age of 35, Lawrence Rajendran has indeed come a long way in life. 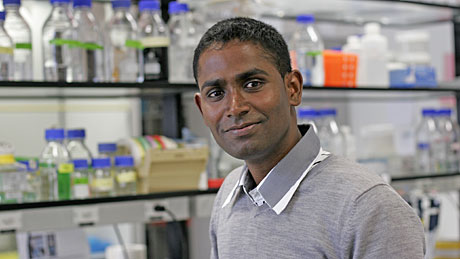 Lawrence, who did his schooling and college in Chennai and is currently working as a co-director and assistant professor at the University of Zurich has won the Hans and Ilse Breuer Award worth 100,000 euros for research in Alzheimer’s in Germany.

The clich?, rags to riches, fits aptly in the case of Lawrence. A rewind into his childhood reveals an alcoholic father who abandoned his wife and three children, one of them Lawrence, who was just five. “My mother single-handedly brought us up and ensured that we got quality education,” says Lawrence.

Lawrence‘s interest in molecular biology and biochemistry began in Class X when he was introduced to it by a professor at the Madras Christian College whom he had met by chance.

“I decided to do my graduation in biochemistry. But back in 1995, there wasn’t a single college for men in the city which offered the course and enrolled for it at the Sri Sankara College for Arts and Science in Kancheepuram,” he says.

Rajendran who received the award for successfully deciphering that specific part of the brain which is the source of the Alzheimer’s disease and designing a drug which addresses the problem says he had always been fascinated by the biological aspects of the disease and wanted to pursue his research in this field.

Lawrence, who was a gold medallist both at the under-graduation and post-graduation level has been funded by stipends and scholarships all through his student life. “Thanks to all the grants and stipends I received I have been able to achieve so much.”

And now, its Lawrence’s turn to stretch out a helping hand to bright students from economically weak backgrounds. Three years ago, Lawrence started the Research Awareness in Student Environment (RAISE) programme to assist undergraduate engineering students from Tamil Nadu’s rural areas who have a passion for research and also to create awareness on research.

Five students are selected each year who are then sent to study in Zurich and Max Planck Universities. These students are funded by the universities and Lawrence. “I got the German Neuro Science Society award for 25,000 euros which I have set aside to fund students who are selected through RAISE,” he says.

Looking back, Lawrence has a lot to be thankful for, especially his mother and sisters who are all praise for him. “He is a gifted and brilliant child. He is a great actor, singer, dancer, orator and writer. He has varied interests and is a voracious reader. You will never find him without a book,” says his sister Florence Rajendran who works as a clinical researcher.

Lily Rajendran, his mother, is extremely proud of her son’s achievements. “Being a teacher I know the importance of education and wanted to give all my children the best education. Lawrence showed great potential even as a child and was excellent in studies as well as extra-curricular activities,” she says.

Though Lawrence only visits his sisters and mothers twice a year, family has always been his first priority, says Lily. “It is because of his hard work, determination and God’s grace that he has achieved great heights,” she said.

One Response to Rags to Riches story of Lawrence Rajendran