The first thing that strikes you when you meet Bhavna Botta is how full of smiles she is. Not surprisingly, she was voted Miss Smiley — and Miss Final Year — at her B.A. Corporate Secretaryship department farewell party in Ethiraj College this year.

It has been a remarkable journey. Bhavna was born with Athetoid Cerebral Palsy, which means she is unable to walk, write by hand, or communicate verbally. Yet, she has defied all odds to complete her Class XII exams from a mainstream institution, Lady Andal Venkatasubba Rao Matriculation Higher Secondary School, and now her Bachelor’s degree from Ethiraj, all using a unique system of communication by ‘eye-pointing’. 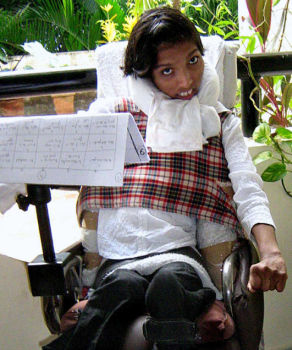 “She is definitely the first person in India — and possibly in the world — to have finished a college degree using the eye-pointing system,” says Kalpana, her mother. With this system, Bhavana communicates — and writes her exams — using a chart of alphabets in numbered columns, spelling out what she wants to say by pointing at the columns with her eyes. The chart was developed specially for her at Vidyasagar (a voluntary organisation that works with children and young adults with cerebral palsy and other neurological disabilities), where she studied until Class X. That’s what she uses during this interview as well, spelling out her answers so rapidly at times that Kalpana can’t keep up.

Foremost on her mind is her emotional parting with M. Thavamani, her principal at Ethiraj College who retired recently, and whom she went to college to say goodbye to. “It was a very unique feeling,” says Bhavna, “something I’ve never experienced before.”

Thavamani describes the meeting in touchingly similar terms: “It was a very emotional moment for both of us; I can’t begin to express the kind of affection Bhavna’s shown me, the department and her classmates.”

She adds: “When I first met the child, I did wonder if she would be able to manage. But today I can say that having been Bhavna’s teacher — I taught her accountancy in her first year — is something I’m truly proud of in my career of 35 years.”

Like any youngster, Bhavna’s fondest memories of her three years in college are of the friendships she formed and of all the fun she’s had. The word she spells out most often is ‘fun’, amidst plenty of laughter, as her mother talks about her adventures in learning to wear a sari and her insistence on going to the beach even though the salt water plays havoc with her wheelchair.

Is she signing up for a postgraduate degree? Her family is trying to convince her to do so. But her mind’s made up and it has been since she was in Class VIII — Bhavna plans to start her own business. “She’s geared all her decisions towards this, whether it was taking accountancy in Class XI or choosing Entrepreneurial Development as her elective in college,” says Meenakshi Subramanian, member of Vidyasagar’s Disability Legislation Unit (DLU), and Bhavna’s close friend and scribe.

She’s already decided on the sort of business she’s like to do — a socially responsible venture selling organic cotton and ahimsa silk saris and dress materials — and she has friends and family collecting information for her on different aspects.

But when Kalpana talks about family funding the venture, Bhavna protests vehemently — she’s determined to start her business with a loan from the National Handicapped Finance and Development Corporation (NHFDC) instead. Her answer to my question “Why business?” was simply to spell out “independence”.

“What’s the next step?” earns a similarly simple response: “Launching the business.” With this plucky young woman’s track record, you’ve got to believe it will happen, sooner rather than later.