Tendulkar’s truest talent—the one that has just seen him hit his 50th Test hundred and brought him close to a 100 international centuries— is not his ability to see the ball early or to pick spin out of a bowler’s hand or to hit through gaps in the field or to pace his batting. It is his ability to want to do these things over and over again, to better how he does them even when he has seemingly perfected them.

This is the talent that helped him avoid the pitfalls in any lengthy career. When this particular ability is called hunger, it sounds grand and magnificent. The more accurate word—discipline— is also the less sexy word. Discipline involves tirelessness and incremental improvement, and how can that be worthy of awe and admiration?  Yet, over the last two decades, if Tendulkar’s batting has shown us anything, it is the sheer virtue of discipline—of the extra half-hour spent in the nets, even after younger, spryer colleagues have hit the bars. That discipline is why, even at 37, Tendulkar can pile up 1,500 sublime runs in a calendar year, enjoying a purple patch that eludes not only freshly blooded youngsters but even comparable peers like Ricky Ponting. Such is Tendulkar’s effect, in fact, that for many of us who have watched him over his international career,his discipline is even more attractive than his straight drive; the latter is only the mastery of a cricket ball, after all, while the former is the mastery of a formidable mind and body. 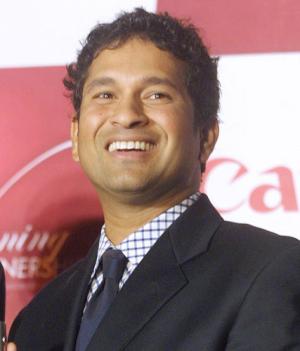 The sheer longevity of Tendulkar’s career offers an object lesson in staying focused. His 22-year-long career, with 50 test centuries and 46 one-day international tons, is not just a source of joy for his fans and followers, but can also be veritable handbook on excellence, leadership and management for businesses.

What are the lessons Tendulkar offers? We spoke to some cricket crazy CEOs for an insight.

“The most important lesson is the fact that talent without discipline is useless tinsel. It takes you nowhere.. Companies and entrepreneurs who do not bring in a certain discipline and rigour can never succeed. Tendulkar is maniacal about his preparation for every single innings he plays be it a crucial test match or an inconsequential ODI,” says K Ramkumar, executive director and HR head,

He recollects watching him during the 2003 World Cup match against Pakistan at Centurion Park when Tendulkar sat alone with his gear perhaps visualising the match-winning knock of 98 he eventually played.

“When Australia toured India in 1998 with Shane Warne at his peak, Tendulkar realised that his ability to counter the legspin coming out of the rough would be crucial. Several weeks before the tour began, he got the former India leg spinner L Sivaramakrishnan, who had retired by then, to bowl around the wicket and into the rough in the nets,” adds Ramkumar.

Although Tendulkar’s two stints as captain proved joyless, he now seems to lead the team through his performance without being designated as a leader. “Cricket is a game that involves decision-making in the shortest possible time between the time the ball leaves the bowler and reaches the other end in a fraction of a second.
Sachin has honed his skill at taking decisions to the finest possible level. It is a quality essential for successful leadership. Also leaders need to have capability to have more than one solution to a given problem. Sachin has many, says Harsh Goenka, chairman of RPG Enterprises .

“The first and foremost lesson for entrepreneurs is to start young, as Tendulkar did. You give yourself that much more time and opportunity to succeed. And if you can remain focused and humble, the sky is the limit,” says Raghavendra Rao, the CMD of Chennai-based Orchid Pharmaceuticals.

“Tendulkar epitomises the mindset of wanting to grow from scratch even after achieving the greatness threshold. He never tends to cool his heels. Companies and CEOs too must always think of starting from scratch even when they hit their targets of say $1 billion revenue. His greatness is that he does the same thing that he has been doing for the last 25 years, but with greater passion every time he takes the field. He has never tried his hand at anything other than cricket. He feels most secure in his 21/2 square foot home called the batting crease,” explains R Suresh, CEO of the executive search firm Stanton Chase .

7 Responses to Inspiring Lessons to learn from Sachin Tendulkar