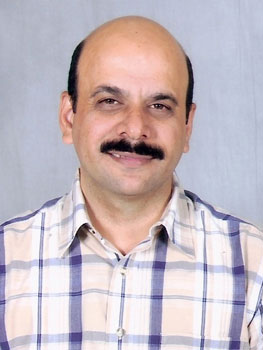 For over ten years now, Khushroo Poacha has stood by the sole belief that to do good work you don’t need money. Poacha runs indianblooddonors.com (IBD), a site that lets blood donors and patients in need of blood connect with each other almost instantaneously. He also does not accept cash donations.

The site has been live for almost ten years and with over 50,000 donors in its database, IBD is perhaps a classic example of what the Internet is truly capable of. But more importantly, it is a reflection of a single human being’s desire to make a difference to this world.

It all started in the mid-’90s when Khushroo Poacha, an employee with the Indian Railways in Nagpur saw a doctor being beaten up because he couldn’t save a patient’s life. No one in the mob seemed to understand that it was the lack of blood that caused the death.

“A few years later, I witnessed the death of a welder because he couldn’t get blood. The two incidents really shook me up,” Poacha says, “And that was when I expressed to my wife my desire of doing something.”

Poacha, however, had no clue about how he could make a difference until one day, sitting in a cyber cafe with a 56 kbps connection, the idea came to him.

“I did not know head or toe of the Internet, let alone about domain names, but I knew this would be the tool that would make a difference,” he says, explaining the dotcom extension to the site.

Over the next few months, Poacha liquidated practically all his savings, purchased a domain name and started up indianblooddonors.com.

“During the time, there were no companies booking or hosting web domains in India. I was paying USD 300 every three months to keep the site live and running. Meanwhile, I had spent almost Rs 40,000 in developing the site and had gone practically bankrupt,” he says.

Poacha says he even went to a local newspaper to place an ad. “I needed visibility and that was the only way I thought I could reach out to the people. The day the ad appeared, I was expecting a flood of registrations,” he recollects. “No one registered.”

The silver lining to the dark cloud came when someone from the outskirts of his hometown Nagpur contacted him, expressing interest. “It was a saving grace,” Poacha says.

Meanwhile, the dotcom bubble had burst and Poacha was being told what a fool he had been. And then there were household expenses to be taken care of too.

“There were many occasions when unpaid phone bills would be lying in the house and there would be no money to pay them off,” Poacha recollects, adding that “things always have a way of sorting themselves out. And mysteriously during such times, a cheque would make its way into the mailbox.”

Poacha admits that his wife was quite apprehensive about his endeavour. “But she believed in me,” he says, “And that has made all the difference.”

Visibility, however, was still an issue. No publication was willing to write about him. No major hospital or blood bank was interested in taking his calls.

And then the 2001 Gujarat Earthquake happened. As visuals of the devastation flashed before his eyes on television, Poacha realised yet again he had to do something.

Only this time he knew just what.

“I called up (television channel) Zee News and requested them to flash the site’s name on the ticker and they agreed.”

“I spoke to the people who were hosting the site (by now website hosting had started off in India) and explained to them the situation. They immediately put me on a fresh server and over the next three days or so I received some 3,500 odd registrations,” Poacha recollects.

Realising the difference he had made, the 42-year-old started working on getting visibility again.

Over the next few months, Poacha had contacted every major magazine and sure enough, a few responded. “Outlook (magazine) wrote about me, then (British newspaper) The Guardian followed suit and then came the BBC,” he says.

Along the way, IBD had also gone mobile. All you had to do was type out a message and send it to a short code and you’d have a list of blood donors in your inbox.

As luck would have it, the service became far too popular for Poacha’s pocket. “By then I had stopped taking cash donations and had to discontinue it,” he says.

Interestingly, IBD is not yet registered as an NGO. “We function as individuals. We don’t take donations and only accept bumper stickers (of IBD) and postage stamps to send out those stickers and create awareness,” he says, “I was asked to deliver a lecture at IIM during a social entrepreneurship seminar and was asked what my sustenance model was. I replied I didn’t have one. And I have been doing this for the last ten years.”

Today, the database of IBD is growing at the rate of 10-15 users every day and the requests have grown from 25 to 40 per day.

Poacha says he eats, drinks and breathes IBD. “The zeal I had ten years ago has not diminished and the site continuously sees innovation.” The latest, Poacha tells us, is the option of being an exclusive donor to one patient.

“During my journey, I realised there were some patients who required blood every month. So if you want, we can put you onto them so you can continue making a sustained difference to one person’s life.”

IBD is currently on an auto pilot mode and Poacha continues to keep his day job. He says, “Initially I would take the calls and personally connect the donor with the patient’s relative. But I know only three languages and I’d get calls from all over India,” he laughs.

Poacha recounts an incident that never left him: “A man from Chandigarh called me and told me he was desperately seeking A-ive blood for his 2-year-old. About five minutes after the call, he got the (difficult to find) blood group he needed. Soon after the surgery he called me up crying, thanking me for saving his child’s life. For me, it was just another day at work. But his whole world was at stake that day. I can never forget that call.”

Last year Poacha was invited to the Asian Social Entrepreneurs Summit 2008 in South Korea where venture capitalists argued that it wasn’t possible to sustain an endeavour without money. He says, “I pointed out that Mother Teresa had no revenue model when she started the Missionaries of Charity. If you want to do good work, you simply do it.”

For someone who has sustained his enterprise for a decade with just a few bumper stickers and postage stamps, Khushroo Poacha knows best.

One Response to Success story of Poacha who saves Lives