Get inspired from life of Ramanujam, Mathematical Genius

It is one of the most romantic stories in the history of mathematics: in 1913, the English mathematician G. H. Hardy received a strange letter from an unknown clerk in Madras, India. The ten-page letter contained about 120 statements of theorems on infinite series, improper integrals, continued fractions, and number theory (Here is a .dvi file with a sample of these results). Every prominent mathematician gets letters from cranks, and at first glance Hardy no doubt put this letter in that class. But something about the formulas made him take a second look, and show it to his collaborator J. E. Littlewood. After a few hours, they concluded that the results “must be true because, if they were not true, no one would have had the imagination to invent them”.

Thus was Srinivasa Ramanujan (1887-1920) introduced to the mathematical world. Born in South India, Ramanujan was a promising student, winning academic prizes in high school. But at age 16 his life took a decisive turn after he obtained a book titled A Synopsis of Elementary Results in Pure and Applied Mathematics. The book was simply a compilation of thousands of mathematical results, most set down with little or no indication of proof. It was in no sense a mathematical classic; rather, it was written as an aid to coaching English mathematics students facing the notoriously difficult Tripos examination, which involved a great deal of wholesale memorization.

But in Ramanujan it inspired a burst of feverish mathematical activity, as he worked through the book’s results and beyond. Unfortunately, his total immersion in mathematics was disastrous for Ramanujan’s academic career: ignoring all his other subjects, he repeatedly failed his college exams.

As a college dropout from a poor family, Ramanujan’s position was precarious. He lived off the charity of friends, filling notebooks with mathematical discoveries and seeking patrons to support his work. Finally he met with modest success when the Indian mathematician Ramachandra Rao provided him with first a modest subsidy, and later a clerkship at the Madras Port Trust. During this period Ramanujan had his first paper published, a 17-page work on Bernoulli numbers that appeared in 1911 in the Journal of the Indian Mathematical Society. 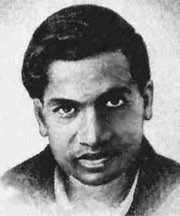 Still no one was quite sure if Ramanujan was a real genius or a crank. With the encouragement of friends, he wrote to mathematicians in Cambridge seeking validation of his work. Twice he wrote with no response; on the third try, he found Hardy.

Hardy wrote enthusiastically back to Ramanujan, and Hardy’s stamp of approval improved Ramanujan’s status almost immediately. Ramanujan was named a research scholar at the University of Madras, receiving double his clerk’s salary and required only to submit quarterly reports on his work. But Hardy was determined that Ramanujan be brought to England. Ramanujan’s mother resisted at first–high-caste Indians shunned travel to foreign lands–but finally gave in, ostensibly after a vision. In March 1914, Ramanujan boarded a steamer for England.

Ramanujan’s arrival at Cambridge was the beginning of a very successful five-year collaboration with Hardy. In some ways the two made an odd pair: Hardy was a great exponent of rigor in analysis, while Ramanujan’s results were (as Hardy put it) “arrived at by a process of mingled argument, intuition, and induction, of which he was entirely unable to give any coherent account”. Hardy did his best to fill in the gaps in Ramanujan’s education without discouraging him. He was amazed by Ramanujan’s uncanny formal intuition in manipulating infinite series, continued fractions, and the like: “I have never met his equal, and can compare him only with Euler or Jacobi.”

One remarkable result of the Hardy-Ramanujan collaboration was a formula for the number p(n) of partitions of a number n. A partition of a positive integer n is just an expression for n as a sum of positive integers, regardless of order. Thus p(4) = 5 because 4 can be written as 1+1+1+1, 1+1+2, 2+2, 1+3, or 4. The problem of finding p(n) was studied by Euler, who found a formula for the generating function of p(n) (that is, for the infinite series whose nth term is p(n)xn). While this allows one to calculate p(n) recursively, it doesn’t lead to an explicit formula. Hardy and Ramanujan came up with such a formula (though they only proved it works asymptotically; Rademacher proved it gives the exact value of p(n)).

Ramanujan’s years in England were mathematically productive, and he gained the recognition he hoped for. Cambridge granted him a Bachelor of Science degree “by research” in 1916, and he was elected a Fellow of the Royal Society (the first Indian to be so honored) in 1918. But the alien climate and culture took a toll on his health. Ramanujan had always lived in a tropical climate and had his mother (later his wife) to cook for him: now he faced the English winter, and he had to do all his own cooking to adhere to his caste’s strict dietary rules. Wartime shortages only made things worse. In 1917 he was hospitalized, his doctors fearing for his life. By late 1918 his health had improved; he returned to India in 1919. But his health failed again, and he died the next year.

Besides his published work, Ramanujan left behind several notebooks, which have been the object of much study. The English mathematician G. N. Watson wrote a long series of papers about them. More recently the American mathematician Bruce C. Berndt has written a multi-volume study of the notebooks. In 1997 The Ramanujan Journal was launched to publish work “in areas of mathematics influenced by Ramanujan”.